The Lives of Tao by Wesley Chu 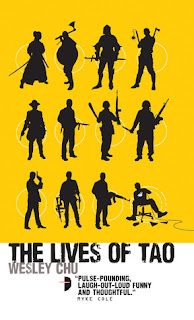 When out-of-shape IT technician Roen woke up and started hearing voices in his head, he naturally assumed he was losing it.

He now has a passenger in his brain – an ancient alien life-form called Tao, whose race crash-landed on Earth before the first fish crawled out of the oceans. Now split into two opposing factions – the peace-loving, but under-represented Prophus, and the savage, powerful Genjix – the aliens have been in a state of civil war for centuries. Both sides are searching for a way off-planet, and the Genjix will sacrifice the entire human race, if that’s what it takes.

Meanwhile, Roen is having to train to be the ultimate secret agent. Like that’s going to end up well…

The Lives of Tao by Wesley Chu is definitely a fun read with a concept that was not only novel, but also, just frankly, very cool. In addition to that, it is definitely funny. It is extremely rare for a book to literally make me laugh out loud, but The Lives of Tao achieved this not just once or twice, but a myriad of times.

The basis of the book is that an alien space ship crash-landed on our planet way before people existed. Earth’s atmosphere is too harsh for them, so they must survive by inhabiting a host body of one of Earth’s native life forms. They pass from generation to generation of Earth’s creatures transferring from host to host.

As one might expect with an ages old group, these aliens have separated into feuding sects, struggling with issues of power and peace. And our protagonist, Roan Tan, an overweight software engineer, whose largest adventures previously consisted of drudging himself to his thankless job on the weekend and getting fall down drunk by himself while watching other people have fun, is suddenly thrust in the middle of this ancient alien war.

Roan’s character was someone I could relate to as a fellow Software Engineer/Java Programmer. Our introduction to him however, shows he hates his job, and allows his boss to take advantage of his spineless nature. He will do whatever is asked to keep his shitty job. That, once again, he hates. But he is likable, you want him to find a way to come out of his shell and be happy. The humor in this book does wonders for making you relate to and root for the characters.

I cannot say that this story was without its faults. At times I felt the pace slowed down, and I will admit to feeling a little nitpicky about some of the technical details related to his job, but those overall were minor. I also predicted the ending, but since I think it was the best way for it to end, I can’t complain about that too much. When sitting back and thinking over this story after finishing it, I am left with a really entertaining read and a desire to know more about what happens next.

For a first novel, I think The Lives of Tao was very well done and I will definitely keep my eye out for the next one. Between the humor and the originality of the story, I would certainly recommend reading it.

The Lives of Tao will be available April 30, 2013 from Angry Robot Books.

About the Reviewer: Lisa spends her days programming in Java, living the exciting life of a cubicle ridden software engineer. When not at work, she enjoys her time with her husband and two boys. She spends the rest of her free time playing on multiple indoor soccer teams and of course reading, reading, reading. She is ‘new’ to the fantasy genre, having read her first fantasy book in 2010. After reading more and more fantasy, she is now hooked and can often be found around the internet searching for her next book and adding titles to her ever increasing TBR list.