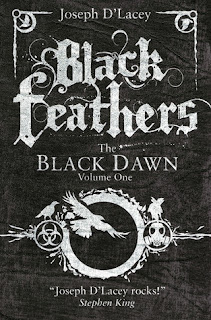 “Satan walks nowhere on this Earth, nor has he ever, save where he treads within the human heart.”

The sum of this book is encompassed in that single line. But don’t let that stop you there.


Black Feathers, Volume One of the Black Dawn Duology, is a dark, grim and haunting tale that gripped me from the beginning and didn’t let me go until the very bitter end. Joseph D’Lacey portrays a horrifyingly believable story of the frightening turns our world could take if we were somehow stripped of our technology, breaking down civilization and if the earth took back the resources we rely on. In this world he constructed, there are legends of one they call the Crowman or Black Jack or Scarecrow. While all the legends seem to agree he is crucial in the Black Dawn, the destruction of the Earth, the opinions on who and what the Crowman is exactly are polarized. Many denounce him as the devil himself, claiming he is the one who will bring on the Black Dawn; he is the one that will destroy the world. Others claim that he is the only one capable of saving the human race and the world in general.


As a reader, I found it intriguing to have such a legend so strongly entrenched in the world, but to have such a clear division of perception of good vs. evil surrounding him.


One side clearly finds the Crowman to be a saint - the other, the very definition of evil. The question is what side will I, the reader, fall on? Will I find this Crowman to be the devil or the savior?


The book unfolds as two tales. Each follows a child on the verge of adulthood. They are each on their own journey to find the Crowman. And each has the weight of saving the world placed on their shoulders.


In the one story, we follow Gordon Black. Gordon watches as his world (the world as we know it) begins to unravel. D’Lacey did a wonderful job building his character, and exposing Gordon’s path from naive child to a determined young man destined to bear the weight of the world, and kept him likable, relatable and believable.


The other story follows Megan Maurice who lives in a simpler time. On her journey, she discovers the destruction that has been wrought across the land. She brings a more wide-eyed innocence to the story than Gordon, who has seen and experienced too many horrifying realities in his young years.


Curiosity plagued me (in a very good, riveting way) throughout this book. I was trying to piece together how the two stories are related, how and if they will ever intersect.


Both stories hint that what is needed to save the world is to save people from themselves, teach them to return to respecting the earth (and each other) rather than exploiting it. That was another thing I loved about this book. It was full of powerful and beautiful passages that while written for this fictional Earth, are also very strongly advocating for us as a people to take better care of the Earth we live on.

It’s the only one we have, and we are guests here. And might I add,  I strongly encourage you to read this book.
Black Feathers is available from Angry Robot Books from April 4th 2013 in the UK and March 26th in the US.
Posted by Unknown at 21:13

Very nice review. Definitely makes me want to read this book. :) I wonder why I've never heard about it before.

Is the second part already out and if it is, is it as good as book one?

Just added to the end of the review - Black Feathers is available in April, and the sequel - I think - is out next year.

And the first part (that I reviewed) comes out March 26th on the US and April 4th in the UK. The second part looks to be slated for 2014. Definitely one I will keep my eye out for!

This seems realy interesting. Must push it up my TBR. Glad I never heard about it till now.

And I really like the new layout, Doug. Seems you found the "home" button. :P